How We Get Around and the Implications for Autonomous Vehicles

How we get around is changing.  The emergence of new business models and new technologies are providing people with new options to get from point A to point B.  Uber and Lyft scaled ridesharing and brought it to previously unserved markets.  Micromobility in the form of dockless scooters and bikes provide urban and suburban residents more options for their shorter trips.  And the emergence of autonomous vehicles may radically transform not only how people get around, but also how the areas we live in are designed.

A lot of these changes are focused in areas with a high population density like big cities.  However most trips, especially vehicle-based trips, occur in areas that are less densely populated.  This means autonomous vehicle technology has the potential to bring big change to the transportation experience beyond cities.   And because of the lower population density beyond cities and its implications for the desirability and viability of a ridesharing model, this technology will likely find its way into personally-owned vehicles as a new feature, as opposed to being the exclusive domain of ridesharing companies.  This has strategic implications for both the autonomous vehicle technology developers and automakers.

How we get around today

Before getting further into autonomous vehicles, let's briefly step back and understand how we get around today.  How do we get around?  In the US, the Federal High Administration conducts a National Household Travel Survey which tells us just that.  The last one was conducted in 2017 and includes trips people make for all sorts of purposes: for work, shopping, entertainment, etc...

It's perhaps obvious that trips by personal vehicle (where I've lumped together cars, SUVs, pickup trucks, and vans) dominate.  But looking one level deeper, the population density of the area someone lives in matters a lot in terms of how people get around.

While personal vehicle trips are the dominant form of transportation, there is variation in denser areas where the mix of modes is greater.  In dense cities, walking is actually the most common mode of transportation, with public transit playing a relatively large role before a large drop off to taxis/ride sharing and bicycles.  But given this data is from 2017, I suspect that the share of ride sharing trips and bicycle trips (via scooters and bike sharing) are higher today.  With respect to ridesharing, it's within these denser areas that consumers desire the service being offered and where it's currently viable for the providers to offer it (though the validity of that point is open for debate).

In most cases, people don't have a lot of practical options to choose from when deciding how to get from point A to point B.  If you live far away from your destination in a less populated area, you are likely constrained to using a personal vehicle.  However, if you're in a city, you may have the option to walk, ride a bike, take an Uber or Lyft, take the bus, or even take the subway.

Understanding how consumers view the desirability of these different options offers a useful perspective on how transportation may evolve for areas where there is currently limited choice as new options become available.  Fortunately, there is some data on that question.  In a 2014 report published by TransitCenter this question was asked of over 11,000 people living in 46 different metropolitan areas.  Their top priorities in choosing between the different modes of transportation available to them? Travel time reliability, total travel time, cost, and the ability to be flexible in the times they travel.

The viability of vehicle-based transportation options

Now let's briefly consider a supplier perspective and the viability of different methods of vehicle-based transportation.  Traditionally automakers sold vehicles to consumers that they operate themselves to get from point A to point B.  Once these companies sell their vehicles to consumers they are no longer involved in the act of transportation (aside from offering maintenance and other secondary services).  This approach has been economically viable for some time with market caps of some automakers reaching into the hundreds of billions of dollars.

In areas with higher population density, there are alternative suppliers of vehicle-based trips - mainly taxi companies and ridesharing companies where the vehicle is both owned and operated by someone else.  The viability of the taxi model has come under pressure with the emergence of ridesharing companies in the form of Uber and Lyft.  While the viability of Uber and Lyft's business models in their current form may be uncertain, they both have market caps in the billions of dollars.  Their business models are currently focused on areas with higher densities.  From Lyft's 2019 Annual Report, "our ridesharing marketplace connects drivers in cities across the United States." And later on, they state their key value drivers for consumers are driven by "providing faster arrival times", the ability to "ensure that riders can get a ride when they want one", and allowing customers "to choose from a broad set of transportation options to optimize for cost".  The viability of this business models in areas with lower population density is more challenged where these value drivers are less likely to be delivered to customers.

The implications on autonomous vehicle development

The emergence of autonomous vehicle technology provides a new approach to providing transportation from the previous two outlined above where the operation of the vehicle is done autonomously.  The diagram below is a simple framework in how to think about the future of vehicle-based transportation.

While there are many hurdles to seeing the widespread adoption of the technology, it is making headway.  Waymo recently opened it's autonomous vehicle transportation service to the general public in Phoenix and now offers rides without a safety driver to anyone interested.  Other companies are also focusing on bring autonomous vehicle technology to the ridesharing space.  There are a lot of justifications to this approach.  Consumers already demonstrate a desire for ridesharing in cities and the surrounding suburbs.  And there's potential to improve the viability of the business model from a regulatory risk and economic perspective.  The legality of Uber and Lyft's approach to treating drivers as contractors is under scrutiny and widespread autonomous vehicle adoption would reduce that major regulatory uncertainty.  It would also alter the economics of their business model and potentially allow them to earn 100% of the fare, as opposed to their roughly 25% take rate currently.

However there is a large potential market where a ridesharing business with autonomous vehicles may not be in a position to be both desirable by consumers (i.e. short wait time, low cost) and viable to ridesharing providers.  Almost 280 billion personal vehicle trips per year happen in areas with a population density below 10,000 people per square mile, where, based on the 2017 data, there was little ridesharing market share.  That compares to almost 30 billion in areas that had stronger ridesharing presence.

This suggests that the market for personally-owned autonomous vehicles in less dense areas that can meet customer needs, particularly for consumers with long commutes where their time can be better utilized doing other things (although the current prevalence of work-from-home due to COVID may alter these dynamics), can be very large and shouldn't be ignored in strategic thinking about the technology's development and deployment.

For developers of AV technology, the implications are that they need to target both markets in their strategic planning.  In the short term, it makes sense to target markets where ridesharing has the potential to become the majority of vehicle-based trips (i.e. areas with high population density) as this form of transportation driven by human drivers is already established, desirable, and viable.  This is likely to be in the form of either launching their own AV ridesharing service or partnering with one of the existing providers.  In the medium to long term, to serve the larger market in less dense areas, they need to focus on partnering with existing automakers to offer their technology on consumer vehicles as an added feature.

From an automaker perspective, it's clear there is a need to at least be involved and informed about this potential transition, if not outright partnering with an AV technology developer to target what could still be a very large personal vehicle market in the future.

With the basics covered of how we get around today and a brief glimpse at high level for what it means for autonomous vehicles, stay tuned for a deeper look at how transportation may evolve in this space. 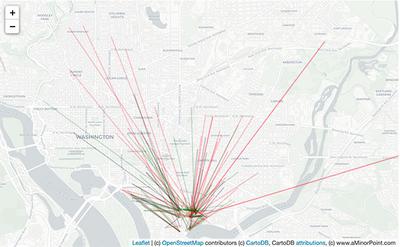 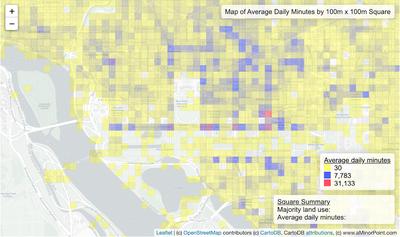 By combining scooter data with publicly-available tax lot and property record data, areas of above-average usage are identified. Hotels generated the highest usage, followed significantly behind by office areas. Dense residential with property assessments in the $400k-$600k followed in third.