Using IRS, Treasury, Federal Reserve, and BEA data to understand corporate taxes in the US

Congress is currently working on passing corporate tax reform. But what's the context? How much do companies currently pay in income tax? After paying taxes, what do companies do with their profits? Will lowering corporate income taxes change that behavior? These important points seem to get glossed over in the political discussion about the benefits and costs of corporate tax reform. So let's take a look.

How much do companies pay in corporate income taxes?

In the 2017 fiscal year, the federal government collected $297 billion in corporate income tax receipts. This is down slightly from previous years and this decline can largely be attributed to a collapse in income tax receipts from the energy sector due to the fall in oil prices from $100 to the $40-$60 range. Keep in mind that companies also pay state income taxes and other types of taxes that are not the focus here.

For added context, in the 2017 fiscal year, the federal government collected $1.6 trillion in individual income taxes.

Looking at the aggregate amount of corporate income taxes paid is a nice starting point, but masks a wide variation. Fortunately, the IRS provides a breakdown of return characteristics by firm size based on a sample taken from all of the filings. Unfortunately, the data comes out with a lag. The latest available data is for fiscal 2013.

Another way to look at the same data is to calculate the average for each size category. The table below lays out those averages.

What do companies do with their profits after paying taxes?

Turning to what these large companies could do with their added profits from a tax cut, there are basically four options.

First, they could "spend" the tax savings by boosting its expenses. That could be done by investing in more R&D or paying its employees more.

Second, they could "spend" the tax savings by lowering prices of their goods and services. Some advocate this as an option for companies to try and gain market share against competitors. It would also benefit consumers by lowering the prices of goods and services. However, if all companies in a particular industry choose this option, then a market share gain based on lowering prices might be hard to accomplish, though the overall size of the market could increase.

Third, companies could use the higher profits to increase capital expenditures.

Fourth, companies could simply pass the higher profits on to their shareholders.

There are other possibilities, but these seem to be the main focus. Debate arises over how companies will use the increased profits afforded by lowering the tax rate. As a basic approach, we can look at what companies do with their current profits. And as the previous table shows, this is really only about large companies as smaller companies don't pay substantial income taxes to the extent that a tax cut would lead to meaningfully more profits which they could "spend".

For context, the chart below shows a recent history of after-tax corporate profits. They have been steady over the past several years at all-time highs, though the composition at an industry level has been shifting. Also note this is after-tax profits, but companies will have more cash flow to use since some expenses for tax purposes are non-cash, such as depreciation of assets.

The chart below shows corporate fixed investment. This is basically how much companies invest in new property, plant, equipment, and other items to grow or maintain their operations. At about $1.6 - $1.7 trillion over the past few years, it dwarfs the amount companies pay in federal corporate income taxes.

Companies, being owned by shareholders, have been distributing a significant portion of their profits in the form of dividends and share repurchases to shareholders. The chart below shows these shareholder returns. Over the last few years, these shareholder returns have been running around $1.5 trillion per year. Recall that the corporate income tax in fiscal 2017 was just under $300 billion. Again, these actions dwarf the amount companies pay in federal income taxes.

And what do these large companies do with their profits? We already saw that they do reinvest in their business to the tune of around $1.6 - $1.7 trillion per year in fixed investment. We also saw that they return money to shareholders in the form of dividends and share repurchases, to the tune of $1.5 trillion per year. Taken together, that's about $3.1 trillion in use of proceeds. Recall that total federal corporate income tax revenue in 2017 was just under $300 million. So lowering the corporate tax rate would provide additional profits to predominantly large companies, but it pales in comparison to the cash flow that companies alrady generate and use to invest and return money to shareholders.

So will corporate tax reform spark a new wave of corporate activity? Based on these figures, it seems unlikely. Instead, it will help predominantly large companies get a bit of a boost in profits, which they can then use to do a variety of things. Based on how fixed investment and returns to shareholders follow corporate profits, it'll likely go towards one of those activities. And the potential boost is quite small in the context of their current operations and use of cash flows.

Other types of reform?

This is not to argue that lowering corporate tax rates is a bad idea. Instead it's to frame where the benefits might lie, who would get them, and what the starting point is. But there are other types of tax reform that might be useful, regardless of what is done with rates.

As one example, simplifying the tax code would benefit all businesses, regardless of their size. The complexity is itself a "tax" on all businesses as they attempt to navigate the tax code. A study by the IRS and the Department of Treasury looking at 2009 tax compliance costs for businesses estimated the cost in the range of $30 - $50 billion. That's a lot vs. the $300 billion the corporate income tax collects! The Tax Foundation estimates even higher costs.

An aside on rates

This discussion deals mostly with the amounts of money paid in taxes. But the tax rate plays a role as well. Economic theory suggests lowereing the tax rate will make investments that were otherwise not econoomic to pursue become economic to pursue. But tax rates are but one piece of that calculation. Another is the rate at which companies can borrow money (either as equity or credit). And the cost to take out a loan from a bank, or in the credit markets, has rarely been cheaper than it's been over the past few years. Another is whether or not there's a need for a new project or investment. So while a lower tax rate might help at the margin, it's not the end-all of factors in deciding whether to proceed with a new project. And many of those other factors have rarely, if ever, been more favorable.

There's also a question of effective vs. headline tax rates. The headline corporate tax rate is high by international standards. But after factoring in various credits and deductions, companies pay a much lower effective tax rate, which can be argued is really what matters when a business is making decisions. The Office of Tax Analysis at the Department of the Treasury put out a report in 2016 that calculated the average effective tax rate across industries and found that it ranged from 20-26% from 2007-2011, the period in which they examined. So hardly any company, if any at all, pays the headline corporate tax rate. So if that's the case, is lowering that on its own a worthwhile pursuit, aside from the optics of doing so?

If you want to explore the data more, the data sources are listed below and are also available on Github. 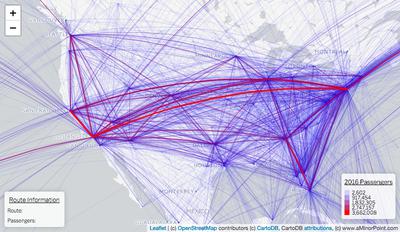 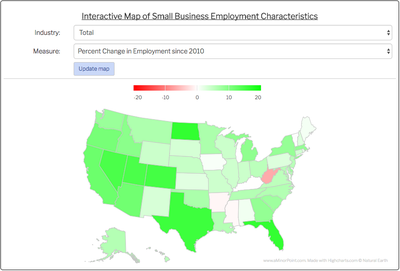 The decline of manufacturing in the US... wait, what decline?

Looking at manufacturing output and efficiency over the last twenty years 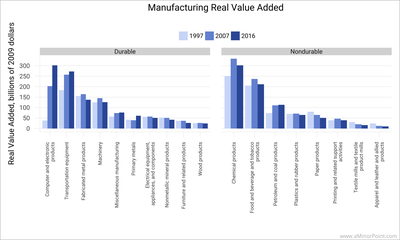 Since 1997 manufacturing output as measured by real value added has increased 40%. While it decreased sharply during the Great Recession, output has almost recovered to that previous peak. But what hasn't recovered is manufacturing employment. The rebound in output has been accompanied by a pick up in efficiency, and the industries where output is growing the most happen to be some of the most efficient manufacturing industries. So while employment has declined, manufacturing in terms of output is doing ok, though there's significant variation at an industry level.